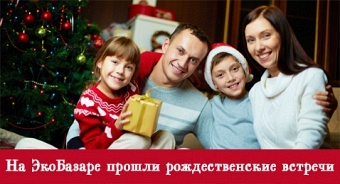 EcoBazaar was making customers happy during the New Year holidays. And you, our dear customers, in your turn were pleased to participate in our activities and were bringing your whole families to us. We were so happy about it!

During this period EcoBazaar was a place for miracles to happen: everyone who thought that he didn’t have any artistic skills created wonderful crafts at the workshops: toys, pictures and other interesting things.

And the customers who had come just to buy bread and milk could see interesting performances: gipsy-girls in bright skirts were singing and dancing, little skamps were showing a foot-tapping musical spot, young talents were singing to a guitar, pupils organized a funny flashmob etc. At the charity fair you could buy not just Christmas balls but real masterpieces. All the proceeds after the fair were sent to the fund that helps children in need.

Of course all that contributed to the visitors’ high spirits and the coming atmosphere of the coming New Year and Christmas was in the air. That is EcoBazaar was full of people with smiles and merry laughs.

Thank you everyone who participated in Christmas meetings and contributed to the celebration of this great holiday!