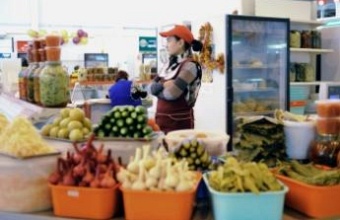 Corruption in managing companies and a preponderance of middlemen damaged the reputation of farmers' markets, according to Moscow's Department of Trade and Services. City officials decided to redeem this trade format by creating new trade facilities. Encouraged by the example of EcoBazaar that was constructed by Rostik Group in the city of Mytishchi near Moscow, the Trade Department proposed to have a similar format replicated in the capital.

Moscow's current farmers' markets are unable to supply residents with fresh agricultural produce. For one thing, there are simply too few of them. For example, if in Barcelona a single market is within walking distance of 31 thousand residents on average, 185 farmers' markets would need to be constructed in Moscow, taking into account the size of its population (11.5 mil. people). For the time being, Russia's capital only has 57 outdated general goods and farmers' markets.

Officials from the Mayor's Office concede that current markets are monopolized by middlemen and that instead of fresh farm produce the markets' assortment of products is represented by an unvaried selection of overpriced goods from warehouses. Moreover, the markets' retail equipment and utilities are outdated. In order to overcome this situation, Moscow's Department of Trade and Services put together a concept of developing state-of-the-art farmers' markets within the city. "We determined the direction in which we need to be going, the format, and the course of action," said Dmitry Krasnov, Deputy Head of the Department of Trade and Services, in an interview with RBC Daily. In its initial stages, city officials plan to put their concept into practice with the help of major private investors.

Several new projects have recently been created in Moscow and the Moscow Region, drawing the attention of Department officials: FreshMarket by the Tashir Group of Companies, Farmer's Bazaar by the Ginza Project restaurant holding company, and Rostik Group's EcoBazaar. City officials recognized EcoBazaar, created in Mytishchi in December of 2011, as being the closest to the model of a farmers' market of the future. The cost of that project was 20 mil. dollars.

City officials liked that the Moscow-area market incorporates energy-saving technologies, as well as its management of retail space and the actual process of market operation, whereby tenants pay for their retail space on a non-cash basis only.

Yes, concedes Natalia Volkova, EcoBazaar Marketing Director, complete ban on cash payments helped eliminate the market's corruption component, "Tenants conduct a one-time money transfer, without having to pay any type of admission fees. At the same time, they also receive a fully equipped retail space, including refrigerators and industrial tables." Before a farmer can begin selling his or her products, those products must undergo rigorous quality control. Following that, if there are several candidates for one retail space, EcoBazaar conducts a tender of sorts among the potential vendors, where product quality and assortment determine the winner.

Taking into account high customer traffic in EcoBazaar (10—13 thousand people a day), only large-scale farms and mini-cooperatives made up of small farmers can provide consistent service there. Valeria Silina, Director of Public Relations for Rosinter Restaurants Holding, believes that small-scale producers should consider joining together in order to have an opportunity to sell their products in markets such as this one. The market also provides retail space for owners of homestead plots, the so-called "granny shopping street", where gardeners can sell produce from their personal plots without having to pay rental fee.

The city is prepared to offer investors the use of the Severny and Koptevsky markets to implement pilot projects for the creation of state-of-the-art farmers' markets similar to EcoBazaar, says Dmitry Krasnov. Cooperation options with future investors can be discussed, he added. In the future, there should be farmers' markets within walking distance in every district in the capital.

Representatives of Rostik Group and Tashir expressed their willingness to work with metropolitan authorities.

Farmers, meanwhile, are skeptical about the proposed development of farmers' markets in Moscow. One rich Moscow-area landowner, a goat milk producer, said that he was not prepared to drive to Moscow only for the sake of selling his products on the market. "We can sell in the capital, but all of our earnings will go toward paying for gas, and the only thing we'd get would be personal satisfaction from the trip," says the man in an interview with RBC Daily. Moreover, in order to be able to trade, farmers would need to obtain certificates for their products, and that would take a ton of time and money, he adds. "It's a lot easier for me to sell live rabbits wholesale with a minimum of certificates required, rather than take my meat to a farmers' market. If I start increasing my livestock and meat production, the quality of my product will definitely go down," says a farmer, specializing in breeding these animals. And nobody repealed corruption on the part of supervisory authorities, he adds. The interviewed landowners sell their products among the locals, pinning their hopes on word of mouth.

← Obninsk TV-channel “Krylia” made a feature about the way “City picnic” was held on March 14, 2015.
↑ Back to list
Moscow Will Have Two Major EcoBazaars →