Moscow Will Have Two Major EcoBazaars 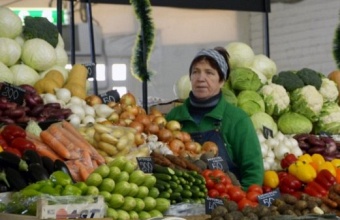 The Mayor's Office wishes to redesign city markets into major ecobazaars. In his interview with the Izvestiya newspaper, Alexei Nemeryuk, Head of Moscow's Department of Trade and Services, said that the Severny and Koptevsky markets can become farmers' markets. According to him, the bazaars will have strict control over whether their offered products are truly farm-based.

According to Alexei Nemeryuk, the authorities plan to ensure that the products offered by ecobazaars are "of good variety, high quality and varied in price". We would like to point out that the idea of creating ecobazaars in the capital was born after Deputy Mayor Andrei Sharonov's visit to such a market in Mytishchi, near Moscow.

It bears reminding that the city is having the hardest time trying to sell four of its markets — Danilovsky, Kuntsevsky, Lefortovsky, and Velozavodsky, for which the capital is asking about 7.5 billion rubles altogether. They were put on sale back in November of 2012, but, according to Vladimir Pogrebenko, Deputy Head of the Department of City Property of Moscow, no one has yet shown any interest in them. For that reason, the current plan is to have the Severny (Babushkinskaya subway station) and the Koptevsky (Voikovskaya subway station) markets renovated with the help of investors.

Those selling the new trading venues are likely to establish their attitude toward farmers in the same manner as is planned for weekend city fairs. The Izvestiya newspaper has already reported that the Department of Trade put together new draft regulations on providing retail space at those fairs. According to the document, only those citizens and entrepreneurs who own a farm or a household plot, or are involved in horticulture, market-gardening, or livestock breeding can apply to take part in trading. Every applicant will need to provide a copy of a supporting document. An example of such document could be "an extract from the rural household register or a certificate from a horticultural, market-gardening or dacha noncommercial association".

"Nowadays, the quality of the products is a number one priority for Muscovites, so there will always be those willing to go even as far as the other end of town to get good quality ones," she explained. "Those products include, first and foremost, meat, fresh fruits and vegetables."

Meanwhile, Ilya Belonovsky, Executive Director of the Association of Retail Trade Companies, is convinced that future market vendors will need to ensure a simplified procedure for submitting documents that confirm one's membership in the farming community.

Vladlen Maksimov, Head of OPORA Rossii's Committee on Small Retail and Fairgrounds Trade, believes that, when it comes to actual practice, new ecobazaars will still be staffed by professional vendors.

"It won't be all that difficult to obtain a fake certificate claiming that you are a farmer," he explained. The expert believes that the important part is to provide enough retail space at the markets, then the majority of products will truly be farm-based. "This is how they do it in Europe, and in France, in particular," he explained. "Nobody there is asked to provide documentary evidence that one is a farmer."