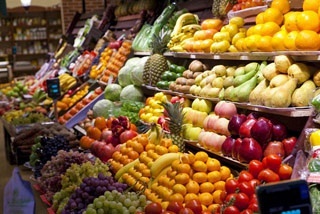 The very first new format farm produce trade center has opened its doors in the Moscow Region. The official grand opening for the unique retail farm produce and convenience goods trade center will take place in early December. The first EcoBazaar is located in Mytishchi on Veterans Boulevard.

Historically this place was home to a market, which was quite often unregulated: grannies were selling produce they harvested from their homestead plots, collective farmers from the Moscow Region and the nearby areas brought in their products.

This all changed in the 21st century. New times – new trade organization formats. EcoBazaar embodies a fundamentally new format; it holds its own with modern retail centers in the level of comfort and infrastructure development.

The primary goal of EcoBazaar is to provide consumers with organic farm-produced goods from every region of Russia and the CIS countries.

In developing the concept of EcoBazaar, its creators followed the example of Spain, notably, its Barcelona markets. Thus the capital of Catalonia has 46 municipal markets, some of which, like La Boqueria and Santa Catarina, are famous all over the world, and those markets draw not only local residents but also tourists from various countries.

Russia's EcoBazaar is a chain project of the Rostik Group company. A minimum of 9 additional construction projects are slated to be launched within the next five years (the company is looking into the possibility of opening EcoBazaars in Zelenograd, Solnechnogorsk, Krasnogorsk, etc.). And the next facility will be constructed in Obninsk.

The bazaar is geared toward all sections of the population and various social groups; everyone, who comes here, can find everything that is needed to set the table, including one for a New Year's party. Here consumers can buy various meat products (carcass meat, sausages, lard, variety meats), fowl, fish, milk products.

EcoBazaar has products for every taste and budget; goods are delivered by farms from every region of Russia and the CIS countries. Here they also bake an assortment of breads: Uzbek flatbread, pastries, sweet baked goods. Here they sell honey from Altai, nuts from Siberia, sausages from Mordovia, venison from the North...

Strict veterinary control is conducted at EcoBazaar at all times. The building houses a state-of-the-art laboratory with facilities for radiological research. All farm produce that do not have manufacturer's certificates undergo daily inspections; sample analysis is conducted on the spot

The design of EcoBazaar combines several styles: a Spanish courtyard, a Dutch windmill, a Chinese tea house, and an Italian wine patio. Flatbread is baked in an Uzbek oven, potatoes and cucumbers are sold off Russian wooden wagons.

The facilities will soon feature a Punto Rosso restaurant that was developed specifically to fit the EcoBazaar format.

← EcoBazaar Is Set to Open in Mytishchi
↑ Back to list